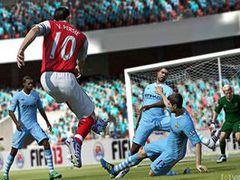 EA has announced that FIFA 13 will release throughout Europe on September 28, 2012.

Fans who pre-order or pick up the game on release date will be provided with the FIFA 13 Ultimate Edition, an exclusive one-day-only edition that includes access to 24 FIFA Ultimate Team Gold Packs.

Ultimate Edition owners will be entitled to one free Gold Pack per week across a period of 24 weeks, helping them build an ultimate team of football superstars. EA says that the freebies would normally set you back over £15.

Pre-order FIFA 13 from GAME and you’ll be given an exclusive adidas All-Star Team featuring 23 of the world’s top players, including Lionel Messi, Nani and Karim Benzema.

Pre-order the game from Amazon, meanwhile, and you’ll be given an additional 10,000 EA Sports Football Club credits, which can be used to purchase additional celebrations, Virtual Pro attribute boosts, extra matches in Head-to-Head Seasons mode and more.

FIFA 13 will be the first game in the series to include Kinect support, a feature that will – apparently – let players swear at the ref. For a full rundown of changes to this year’s game, check out our first look preview.