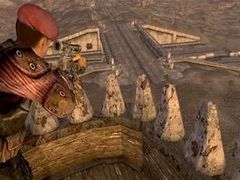 “Fallout New Vegas pre-orders are far outstripping those of fallout 3,” said Seaby. “Based on the feedback from gamers, we anticipate fans will enjoy returning to the fallout universe, where they will experience a new story in an exciting New Vegas setting.”

Seaby added: “We’ve been very happy with how Fallout: New Vegas showed at this year’s E3. Retailers were impressed with what they saw and we received numerous awards and nominations from a variety of media outlets.”