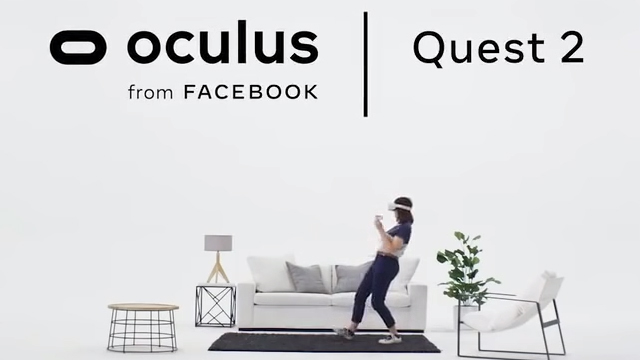 It appears Facebook is gearing up to announce the next iteration in their VR-headset system that doesn't require a PC, according to promotional material that has found its way online.

As reported by Eurogamer, a couple of videos popped up on a hub on Facebook Blueprint, an online training website from the social media company that owns Oculus, that showed off the new system and some of the improvements over its predecessor. They were eventually taken down, but not before the internet grabbed them and the videos were re-uploaded by YouTube user DimetappWUT.

According to the information, the new headset will include a Qualcomm Snapdragon XR2 processor, 6GB of RAM, 2K resolution per eye—an increase of 50% more pixels than the original Oculus Quest headset—3D positional audio, new ergonomics for the controllers and an optional 256GB of storage space.

It also seems that all Oculus Quest games will work with the Oculus Quest 2, so there's no need to worry if you've already built up a library and are looking to upgrade.

There's no word on pricing or release date as of yet, and no confirmation to the veracity of these leaks from Facebook themselves so take some of this information with the required dose of salt, but they're set to hold their annual Facebook Connect developer conference later this week on Wednesday, September 16 so expect to hear more then.

Until then, check out the videos for yourself below. Earlier this year, Facebook's Vice President of Gaming initiatives Jason Rubin said the Oculus Quest is set to get more "really big, amazingly big" titles in the coming months.