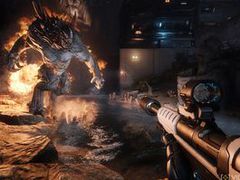 ORIGINAL STORY: A countdown has appeared on Evolve’s official website, almost 18 months after the game’s release.

Some have speculated that the game could be transitioning to a free-to-play model, while others have guessed that it could be counting down to the announcement of a sequel. Whatever it is, expect something big to be revealed tomorrow.

Evolve launched on PS4, Xbox One and PC in February 2015. It was a bit of a disappointment.