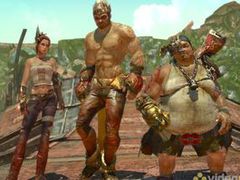 Namco Bandai has revealed that Enslaved has now sold 730,000 units worldwide as of March 31, 2011. The number is still short of the 1 million it originally forecast and the 800,000 revised figure.

More impressive for Namco Bandai is an additional 1.15 million units of Tekken 6 sold during the financial year – the game launched back in October 2009. Naruto Ultimate Ninja Storm 2 shifted 1.1 million units.

Overall sales were up year on year by 3.1 per cent, with most of the company’s sales coming on the PlayStation 3, PSP and DS.

Talk of an Enslaved sequel has been doing the rounds since before the original game hit stores in October 2010, but sales must be worrying for Namco Bandai. Even with significant price reductions (the game has been available for around £15 in the UK for some time) the action adventure title hasn’t reached the 1 million sales milestone.