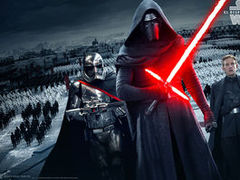 Future Star Wars games developed by EA will be able to include the characters and vehicles introduced in Star Wars: The Force Awakens, the publisher has said, but it seems unlikely that any of them will appear as DLC in last year’s Star Wars Battlefront.

Speaking during an earnings call last night, CFO Blake Jorgensen explained that the publisher had to be careful not to violate the canon of Star Wars by putting characters from The Force Awakens into Battlefront, which is set 30 years earlier during Episodes 5, 6 and 7.

“On Star Wars, the one thing that we are adhering to, and I think this is part of our arrangement with Lucas and Disney, is you can’t make a game in Star Wars that violates the canon of Star Wars,” Jorgensen said. “Meaning you can’t take something from the future and bring it back into the past unless it’s a reference. Not knowing yet exactly what the storyline in [Star Wars:] Rogue One is going to be, I can’t comment on how that could come in. But to the extent that it’s in the future… Our current Battlefront game is all based on the historical Star Wars canon, which is 30 years before the most recent movie, that will limit our ability to bring some new content into that.

“But more to come there obviously,” he continued. “We’re trying to stay tightly connected to the Star Wars beat for future movies and we’ll obviously in future Star Wars games be able to tap the new characters and vehicles and so forth. But in our current game and for that manner the DLC associated with that current game obviously we’ll have to be careful that we don’t violate the cannon.”

EA announced Star Wars Battlefront’s full line-up of DLC earlier this week, confirming that new maps set on the Death Star, Sullust, Tatooine and the Cloud City of Bespin are all due to release later this year. The final expansion pack, which has yet to be detailed, will then launch in early 2017.

EA does have plans to release another Battlefront game in the future, Jorgensen suggests, telling an analyst earlier in the call that EA would have to wait and see how digital and physical sales would be split following the release of “the next Battlefront”.

Visceral Games is also developing a new action game set within the Star Wars universe, although it isn’t yet clear which time period the game will be based in.