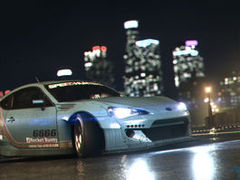 EA undecided on the return of annual Need For Speed

EA COO Peter Moore has said he is unsure whether Need For Speed will return to being an annual series, telling MCV that the publisher is waiting to see how this year’s game goes before making any decisions on the future of the franchise.

“I don’t know if it will be, it’s an interesting question,” Moore replied when asked whether Need For Speed could return to being annualised. “We will see how this game goes. You can only bring it out annually if you can come up with real fresh ideas.

“It is the same thing we’ve been going through with golf,” he said. “It is golf… is there enough innovation and creativity that you can go in there with and do something different every year?”

Need For Speed took a year off in 2014 to allow developer Ghost to focus on this year’s reboot. The game’s absence marked the first time in 13 years that Need For Speed had skipped an annual release.

This year’s Need For Speed is set within a fictionalised version of Los Angeles and is described as a “full reboot” of the franchise. Producer Marcus Nilsson says it’s the game EA has “always wanted” to make.

Look out for it on PS4, Xbox One and PC on November 5.