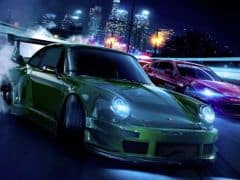 You’re the new Rad Dude on the block, you just totally evaded those narcs from the Ventura Bay PD and you’re totally invited to this party where some hip-hop will be played and… yeah, this is what Need For Speed is like this year. If it could be summed up in a word, it would be ‘dull’. If you needed another, then ‘baditude‘ would suffice to explain the game’s cutscenes and story.

Which is a shame, given that EA decided to abandon the yearly cycle to try and get the best out of Need For Speed: it’s obvious the dev team over at Ghost wanted to create something fitting for a series that has been around longer than some of you reading this have. Sadly, it’s not happened.

In order to try and better Rivals, Ghost has combined the open world of the past few NFS titles and thrown the veneer of the Need For Speed: Underground series on top of it. (In a definitely, totally unrelated point, the Underground series was the best-selling era of Need For Speed.) This amounts to racing around in a city where the sun, almost literally, never rises. It’s also a city where your internet connection never drops, as if it does you’re kicked back to the title screen: a huge irritation.

Almost as irritating: you’re thrown head first into a story where you’re some nameless dude who befriends some of the worst people who have ever existed, before risking life and limb racing for and with them. Engaging with Need For Speed’s plot is like staring into the abyss, only the abyss doesn’t stare back, it rings you three times, texts you then tweets endless inanities and hashtags your way.

(That said: one thing I do actually love about it is the leap back in time by EA to using real-world actors and FMV. While the reasoning isn’t the strongest – your actual, customised car is in the background while the dudes and dudettes are doing their gnarly acting, although it looks rough – it warms my cockles that between this and Guitar Hero there’s a place for this stuff in modern gaming. Hopefully next time around they’ll go for more of a Red Alert 3 vibe than what Need For Speed shows off – more tongue-in-cheek, less design-by-committee ‘rebels’ and ‘humour’. George Takei for NFS2? I’m down with that.)

Anyway, that story serves the purpose of giving you, yes, purpose, as well as a few cheap unintended laughs. Your five contacts almost always have tasks for you to be completing, be that races to win, drift challenges to drift-win, or smashing shit up and getting into a hot pursuit situation for a while. You’re rarely lacking actual goals.

The way these characters are divvied up is well done – they’re categorised into style (drifting), build (customisation), crew (doing things with others), outlaw (revving your engine at pelican crossings and going 31mph in built-up areas) and speed (speed) – and you either have to race in a manner suited to the person, or you receive rewards based on who you’re racing for/with. This bleeds through into the rest of the action, with combo multipliers pushing you forwards throughout. Driving at your top speed will get you some points, drifting around a corner will add a multiplier, if you’re doing this in a souped-up car you tinkered with yourself then it’ll hit a 3x multiplier and so on. It’s effortless and unintrusive, thus meaning it’s good. It’s the best thing about Need For Speed, in fact.

Sadly, the rest of the game isn’t anywhere near as well-crafted. While it’s competently put together and is solid from start to finish, that doesn’t change the fact that Need For Speed is dull.

You can be racing through slick, nighttime streets with police in hot pursuit, drifting corners at 130mph and smashing through road signs and all manner of pavement-based items, performing near-misses with oncoming traffic before boosting away to safety – but it’s just not exciting. I know how this stuff should go – I’ve played Burnout 3, Trackmania, Felony 11-79, the classics. Need For Speed isn’t like those games. It’s second only to real life Formula One in the ‘most boring high-speed thing in the world’ stakes.

Many other games – your Forzas, Driveclubs, etc – have a tremendous sense of pace to them. It’s rarely white-knuckle, particularly, but it is exciting. It gets the blood pumping. It feels like you’re actually going fast. Need For Speed does not do that. The cars say they’re going fast, but you always seem to have three days to react to any upcoming turn: you often don’t even notice you’re redlining, meaning this game needs more speed. Maybe it’s because the roads are so wide, the buildings so far apart, that you’re not picking up on as many reference points zipping past your field of view. Or maybe it’s just a decidedly pedestrian pace to the game.

This comes down to a few crucial elements, apart from the obvious lack of speed. There’s the fact there’s so little activity in the city around you – I know it’s at night, but there’s hardly anyone on the roads and that’s bloody boring. Handling is the wrong side of way too simple, even when you adjust your car to be more drift or grip (it makes little difference). Your opponents follow racing lines nigh-on perfectly, aren’t aggressive and suffer from such heavy rubber banding that the Royal Mail depot down the road from me is getting in touch to see if they have any to spare.

It all combines to make a game that’s easy, unfulfilling and so banal that it almost shocks. The underground world of criminal activity you play in is full of archetypes surely created in a ‘safe but edgy’ thought shower attended entirely by men wearing suits and Fitbits. When you first see Ken ‘Rad Dude’ Block, he is decked out entirely in Monster-branded clothing, drinking large cups/cans of Monster and surrounded by lackeys all doing the same. It’s embarrassing.

Need For Speed knows what it wants to be, it just doesn’t really know how to do it. Or maybe, more damningly, it knows exactly how – it just holds back for fear of alienating the millions (and millions) of NFS fans, the more casual players who just want something simple and easy to while away the 12 months until the next game comes out.

Would you actually play it for those 12 months? You probably can – as I said earlier, you’re never without a mission or five to get involved in, and the general sense of progression will trigger some ‘positive reward’ bit of your lizard brain to push you into playing more. But while the actual scoring system is great fun, your progression feels nigh-on meaningless – you unlock more races, more parts for your cars, see more FMVs, but you never feel like you’re getting anywhere. It just stalls.

So, in a roundabout (none of those in this game) way, Need For Speed is a success. It does exactly what it sets out to do. But what it sets out to do is boring, bland, unimaginative and thoroughly dull. It’s sometimes fun, very pretty, and enables you to plaster stickers of dogs all over your newly-pink Mustang, and it’s riddled with great ideas like the fine online challenges with friends and enemies alike, annoying connectivity issues aside. But it meanders, settling on a rhythm that can only be described as ‘safe’, not pushing the player to be anything other than adequate. I adored NFS: Hot Pursuit, I got a lot of fun from Most Wanted, I even didn’t totally hate Rivals – so it saddens me to say that, at the end of the day (which is always the time in Ventura Bay) Need For Speed just isn’t that good.

Slow, boring, and rarely challenging, Need For Speed is a serious misstep.
5 Has a good multiplier system Looks gorgeous at times Meandering, with little sense of progress Feels slow