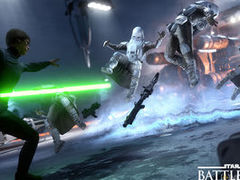 EA would be prepared to delay Star Wars Battlefront beyond November if “something went wrong” in the run-up to the game’s launch, COO Peter Moore has said.

“We’d have no compunction, no hesitation that if something went wrong with Battlefront, if it wasn’t right, we would just push it.”

Moore’s comments follow 18 months after the publisher encountered major problems at the launch of Battlefield 4, a similar online shooter to Star Wars Battlefront. It later delayed cops & robbers spin-off Battlefield Hardline from October 2014 to March 2015 to ensure the game could be “as great as it can be”.

Star Wars Battlefront, meanwhile, launches on PS4, Xbox One and PC on November 20, one month ahead of this year’s blockbuster movie Star Wars: The Force Awakens.