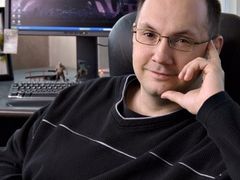 Speaking today at the Develop Conference in Brighton, Silicon Knights founder Denis Dyack has boldly claimed that a single platform future for the video games industry is inevitable.

In a session titled, “Design: Video Games as The Eighth Art” Dyack said the video game industry must follow the movie industry and adopt a universal medium on which games are played.

“Because we have the three consoles we’re in this really weird state,” said Dyack. “The cycle right now for movies has become pretty well established. For video games it’s become hyperbolic almost. There were 300 or so games released last November. We’re in a state of performance over supply. We’re making more games than consumers can possibly consume. Marketing is having a disproportionate effect over the success of games because there’s so many out there people are ignoring us. Sometimes it doesn’t matter if your game’s good or not; if you don’t have that marketing support it won’t happen.”

Dyack continued: “In order for us to get into a cycle similar to films and movies we have to go to a universal media where this is what plays your video game, whether it be Cloud Computing, OnLive or some other system like Dave Perry is talking about, it really doesn’t matter. We need to get to a point where we have one medium you can play the games on. Right now we’ve got five or six.

“If you look at the film industry there’s only one projector. It’s a pretty universal form of, how am I going to show this film? We don’t have that in the video game industry right now. We have to move in that direction. I would like to see it personally, but we’ll see. Console manufacturers would be somewhat unhappy.

“We’re being slowed down a lot by the multiple consoles.”

Questioned if a single platform future could ever become a reality, Dyack said it is “inevitable”.

“The value of technology is becoming less and less significant compared to the games that are on it. It’s costing hardware manufacturers more and more to do research and development. Video game publishers are having a harder and harder time making money,” he said.

“If you look at the split right now, Nintendo is doing very well, Xbox is doing really well, Sony’s not doing as well. No-one knows for sure where to dedicate their development resources to. Back in the old days when Nintendo was dominant, it was close to monopolistic, but at least if you made a game for a Nintendo console you knew you were getting about 80 or 90 per cent market penetration. These days it’s a real gamble.

“The market forces are eventually going to overturn, or the publishers are going to start going out of business and no-one’s going to be making games, until someone stands up and says look we’re going to have one universal console, it’s what it has to be, we don’t want three copies or three different versions of the same game, we don’t want to have something special for this controller, or some special character for this downloadable platform, we just want to make our game and we want to make money from it and we want, as entertainment developers, to create our one vision. That’s eventually what’s going to follow because it has to.”

Do you agree with Dyack? Let us know what you think in the comments section below.