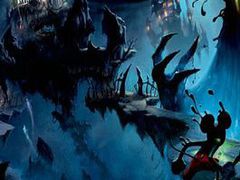 Disney Epic Mickey 2: The Power of 2 from Disney and Junction Point will be released for Wii, Xbox 360 and PlayStation 3.

Epic Mickey 2 finds Mickey back in Wasteland, the twisted take on Disneyland which is inhabited by forgotten characters and theme park attractions. Whilst somewhat familiar, earthquakes and other disasters have changed the appearance of many locations visited in the first outing.

Not only is the sequel coming to high definition platforms, but the game’s characters will also feature full voice acting and take part in musical numbers. Jim Dooley and Mike Himelstein, the composer and lyricist who wrote the music for the upcoming animated film Dorothy of Oz, are crafting original songs for Epic Mickey 2.

“I’m such a geek about musicals,” said Junction Point boss Warren Spector at the recent Game Developers Conference. “I love the co-op and next-gen stuff, but for me, when a character breaks into song, which they do on a regular basis in this game, it’s magic.”

And this includes Oswald the Lucky Rabbit, who had a starring role in the first game. Having never before uttered a word, Oswald will be voiced by veteran voice actor Frank Welker.

“I couldn’t be more pleased,” said Walt Disney Co. archive director Becky Cline. “Once you give a character a voice, it takes it to a whole new level. I can’t wait for the public to see it and embrace Oswald the way that we have over the years in the archive.”

The sequel will also see Oswald become a playable character, joining Mickey in a new drop-in drop-out cooperative mode. Mickey can once again use magic paint and thinner, whilst Oswald gets a remote which can command electricity.

“It’s drop-in, drop-out co-op,” said Spector. “You can sit down at any time with a friend who is playing as Mickey, and you can take control of Oswald. If you’re playing as a single player, Oswald will be there every second of the game. He’s not just a multiplayer character. He’s a helper, whether you’re playing alone or with a friend or family member.”

Fans of the original game will also be pleased to hear that its problematic camera is being fixed for the sequel.

“We’ve had a team working on the camera from literally the day we finished the first game,” said Spector. “They’ll be working on it until the day we ship the second game. (There have been) over 1,000 specific changes made to the camera. Our goal is that you will not have to touch the manual camera controls even once to play through the main story path of this game.”