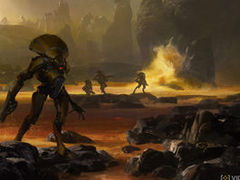 Bungie’s new game engine – which powers the newly unveiled Destiny – has been in development for the past four years, and it promises to scale up to whatever new hardware comes our way in the next 10 years, says senior graphics architect Hao Chen.

“Over the last four years we have built a truly state of the art engine,” Chen told OXM.

“It’s by design multi-platform; it’s highly multi-threaded, scales very well to the current generation and the future generation of hardware.

“We have a ton of new features, from our multi resolution terrain systems, to our forests and trees, to rivers and likes, to real time lighting, visibility, lots of cool technology and I could go on and on about them. Maybe one day I can give you an in depth review of all this cool technology.”

Engineering lead Chris Butcher added that the engine is “fully multi-threaded for performance on all platforms, both for today and the next ten years”.

“We have an entirely new graphics engine and a fully featured world builder that gives out artists more expressive power than they’ve ever had before.”

Destiny is without a firm release date, but we do know it will be released on Xbox 360, PS3 and future console platforms.