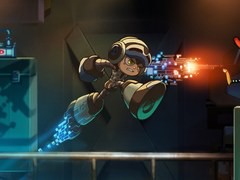 Deep Silver declines to comment on rumoured Mighty No.9 delay

Deep Silver has chosen not to comment on rumours suggesting that Mighty No.9 may have been delayed, after it was discovered that various US retailers had updated the game’s product page with a placeholder 2016 date.

Amazon, Gamestop and Walmart each updated the release date from September 2015 to 2016 last night, suggesting that the upcoming platformer could be facing a delay.

The previous September date was announced back in April alongside a partnership with Deep Silver. Before this, the game had been expected to launch in April.

Retail editions will be available for Xbox One, PS4, Wii U, PC, Linux and Mac. PS3 and Xbox 360 versions will be digital only, with portable versions on PS Vita and 3DS to follow at a later date.