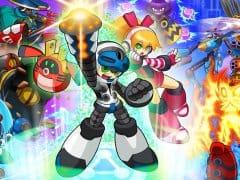 I’ve played Mega Man, but I’ve never ‘played’ Mega Man. It’s largely similar to how I used to watch F1, but can’t drive a car and don’t really know who any of the drivers are any more. It’s a thing I know exists and could bluff my way through in a conversation with another bluffer, but talk to anyone who actually follows F1 and my paper-thin knowledge would be exposed. Sadly, for the majority of my time playing Mighty No.9 (the 2D, Kickstarted spiritual successor to Mega Man), I got the impression famed creator Keiji Inafune and his team might have been bluffing too.

Mighty No.9 is one of the oddest games I’ve played in a very long time. It can be maddeningly difficult at points, especially when facing off against some of the end of level bosses, yet it’s possible to breeze through a lot of it without really knowing what you’re doing. And you might not know, as the game is practically incompetent when it comes to telling you anything beyond the basic controls.

A core mechanic sees playable character Beck shooting robotic foes before dashing into them to grab some health, speed or weapon abilities – something that’s not dissimilar to the glory kills in Doom, albeit less satisfying. The dash move also comes into play when moving around the reasonably well designed (although visually unremarkable) stages, enabling Beck to cross large gaps or zoom through narrow crawl spaces.

Generally the platforming and shooting during the bulk of the levels is decent if nothing special, although (unless I missed some instructions) you can’t shoot up or diagonally – there is a diagonally-down attack option, but to do so Beck must leap back and up by using a specific button combo. There are tricky moments (and plenty of infuriating instant kills), and you may well find yourself running out of lives and forced back to the start (you can choose to have up to 9 lives in the options menu), but nothing compares to the numerous ridiculously cheap bosses.

Bosses, who are the Mighty No.1 to 8, must be worn down with normal attacks and then damage accrued must be ‘banked’ by dashing into them. Annoyingly you will soon become the weakest link and kicked out when you’re smashed to pieces by an unfairly powerful move. The game’s first proper boss, for example, can kill you in one hit. Fall victim to this a few times and your lives will all be gone. Then you must trudge through the entire level again to have another stab at a boss you now hate, where you’ll probably die repeatedly again.

Whereas games like Dark Souls are difficult and can feel unfair, you do for the the most part make progress at all times. That isn’t true in Mighty No.9. In fact I’d played for a few hours, skipping ahead to different levels after each successive major annoyance, and made precisely zero progress beyond the opening prologue stage. You will (hopefully) defeat them in the end (with only a couple proving to be ‘walk away from the game’ levels of annoying), and some deliver the kind of intense battles expected from a Mega Man successor, but these moments of excellence are rare. It’s also worth pointing out that the final boss is so bewilderingly awful you’ll wonder if the work experience kid designed it.

The fact that you can choose the stages in any order (until the final set of levels is unlocked) is a throwback to Mega Man, but also somewhat bizarrely rather inconsequential for the most part. When you do eventually defeat a robot boss you gain their special ability, which you can then use to your advantage in battle or as the ideal weapon against another boss. It’s a neat mechanic, undercut by the fact that most of the abilities seem largely pointless, proving to be less useful during normal play than Beck’s standard blaster.

Presentation is also a big problem. Anyone who backed the game on Kickstarter might remember an early look based on seven days of work using the Unreal engine. This game looks an entire generation (if not more) worse than that early prototype. ‘It looks like a PS2 game’ might be a throwaway statement of hyperbole, but certain areas of Mighty No.9 are actually hideous by today’s standards. To my eyes it resembles a lot of Dreamcast output (and not in a good way), while the terrible story and laughable voice acting simply compound matters.

Mighty No.9 is not the classic many hoped it would be. It has moments of quality, and long stretches of competency (although you can finish in 3-5 hours), but numerous terrible design choices and ugly presentation make it incredibly hard to play without becoming frustrated. Regardless of how much you like the Mega Man series, in Mighty No.9 you’re unlikely to find a game that comes close to that legacy. True fans may well find the lack of class here even harder to take.

Regardless of how much you like the Mega Man series, in Mighty No.9 you're unlikely to find a game that comes close to that legacy.
5 Some enjoyable boss battles Dash mechanic is neat Some horrid boss battles and cheap kills Visually bland and uninspiring