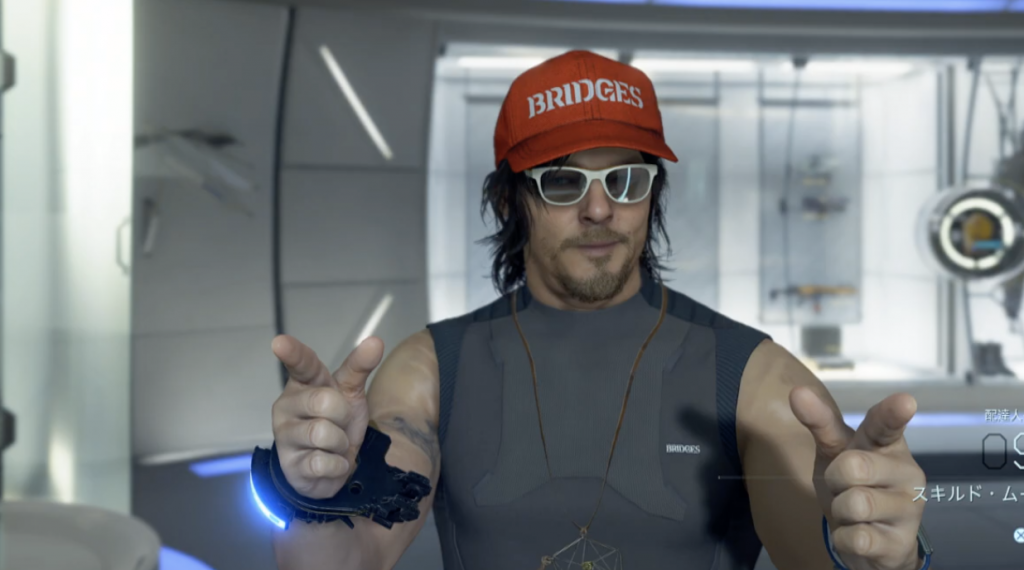 At Tokyo Game Show, Death Stranding received another lot of extended gameplay footage, and this time, it’s all about the safe house that Sam retires to in between missions (thank you, Gamespot).

In the safe house, players don’t control Sam directly. They will instead control a camera and Sam will react to the camera’s movements, and potential actions will arise as the perspective swings around the room. Commenting on the gameplay, Kojima said it is kind of like a bishojo game, where the character and the player have a degree of reciprocity.

Sam will signal what he wants to do to the player by pointing at various places in the room. For example, he was dirty from his expeditions and pointed at the shower so that he could clean himself up. Not only is the shower refreshing, it possesses an unexpected feature. The run off from Sam’s shower will be crystallised and used as munitions for weapons, but this will also occur outside of the shower too. Consumables and all other tools are produced from Sam’s bodily fluids through 3D printing. Kojima isn’t the first to use urination mechanics in a video game, but he could be a trailblazer when it comes to printing bullets from Norman Reedus’ poo, wee, and sweat. Maybe there’s a reason for that.

There’s a holographic map of the world projected onto a wall, where players will review main missions, read emails, and flip through the collected codex entries. Contrary to its name, the safe house will become damaged over time and require repairs. Its furnishings will change depending on what Sam carries with him and how much of the game has been completed so far. If players are very proud of their grand designs, the room can be shared online for other players to see.

Customisation options are on offer, too. The all-important backpack can be modified with additional pouches and batteries, but it has limited space and so players will need to be savvy with what they use. The backpack comes in different colours, and Sam can don a hat with the Bridges logo. He puts on this and a pair of sunglasses in the demo, and shows the camera a big thumbs up. He also chows down on an insect found in a jar, which is a big thumbs down from me.

This is but a smattering of all the stuff packed in to the safe house for players to experience, but you can check out the entire demo below. Along with this, Kojima Productions unveiled a proper look at gameplay in the world of Death Stranding, which you can read all about over here.

Death Stranding launches on November 8 for the PlayStation 4, and then for PC at a later date.