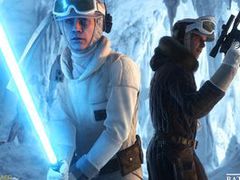 EA has announced the lineup of free and premium content heading to Star Wars Battlefront this year and next, confirming that a multiplayer map set on the Death Star is due to arrive later this autumn.

The first piece of new content will arrive tomorrow with the introduction of new Hoth-themed outfits for Luke Skywalker and Han Solo (above), plus a new ‘Raider Camp’ map based on Tatooine’s Survival mission designed to support the game’s Blast, Droud Run, Drop Zone, Hero Hunt and Heroes vs Villains multiplayer modes.

Both pieces of content will be available for free.

March also marks the debut of premium DLC, beginning with the Outer Rim pack that will let players “fight among the factories of Sullust and battle within Jabba the Hutt’s palace on Tatooine”.

Three further expansions are also due to roll out between summer 2016 and early 2017, the details of which you can see below:

Each expansion pack will be included as part of the game’s Season Pass, although individual prices have yet to be confirmed.

“At DICE, we’re passionate about what we’ve created with Star Wars Battlefront, and are committed to supporting not only the game but all of our fans over the months ahead,” said senior producer Sigurlina Ingvarsdottir. “We can’t wait to keep traveling through the galaxy far, far away, with all of you.”