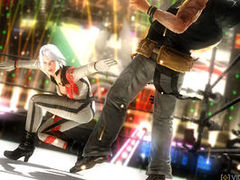 Koei Tecmo says that over 300 “open and unlockable” costumes will be included on the Last Round disc, along with brand new hairstyle and accessory options. The game will cost £34.99 on PS4 and Xbox One and be available digitally for £24.99 on PS3 and Xbox 360.

It will also feature the largest roster of fighters in any Dead or Alive title so far, including:

“Dead or Alive 5 Last Round marks an exciting step forward for the franchise, and one that fans have been asking for,” said Team Ninja leader Yosuke Hayashi. “Bringing the game to a new generation of consoles is allowing us to create the most graphically striking version of any Dead or Alive game ever, and we are very happy to give our fans the chance to experience our signature high energy fighting entertainment as only the latest consoles can deliver it.”

Dead or Alive 5: Last Round launches on Xbox One, Xbox 360, PlayStation 3 and PlayStation 4 in spring 2015. A playable PS4 demo will be shown at TGS later this month.