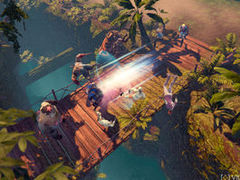 Dead Island Epidemic is being shut down

The game’s servers will remain live until October 15, after which the game will be gone for good. If you’ve still got any currency left, Deep Silver will be offering a “very large discount on all characters and boosts to give everyone a chance to spend any remaining currency on characters and items you may have wanted to try before, but never did”.

“Ever since starting with the Closed Alpha, and all the way through the Closed Beta and Open Beta, we’ve received a great amount of useful criticism and encouraging feedback from our players,” Deep Silver wrote on the game’s Steam page. “This has been invaluable for all the teams involved in developing the game.

“Over the past weeks and months we’ve been evaluating how to proceed with Dead Island: Epidemic and looking towards the future for the game. We’re sad to announce today that we’ve come to the conclusion to cease further development. “

The game’s cancellation follows shortly after Deep Silver announced that it had parted ways with the developer of its next major Dead Island title, Dead Island 2. The game is still formally dated for release in 2016, although without a developer having been publicly signed on, the window is beginning to look increasingly unlikely.