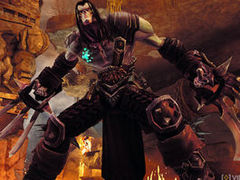 Darksiders II confirmed as a Wii U launch game

Darksiders II will be available at “day one” of Nintendo’s Wii U, Vigil Games lead designer Hayden Dalton has confirmed to Digital Spy.

And it won’t be a straight port either, with a small team ensuring the game will make use of the Wii U’s touchscreen controller.

“That’s been very interesting to see what those guys are doing, and they’re making efforts to make sure we do use it in more than a slapdash way,” Dalton told Digital Spy.

“It’s basically the core game, but then with added abilities to do certain things that you can’t do on the other consoles.”

One way the controller could be used is to switch equipment on the fly.

“One of the things that we did, when we were originally going to show it off, was that you could equip stuff directly,” explained Dalton. “So, for instance, I could be running along and I could click on another piece and I could put it on as I’m running through the game.

“That’s huge, it’s not breaking up the game in a way, I’m not going into a menu and assigning it, I’m literally just tapping as I’m playing.”

Darksiders II will be released June 29 on Xbox 360, PS3 and PC. Wii U is expected to launch later this year.