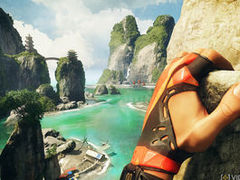 Developed by Crytek’s Frankfurt team, The Climb aims to recreate “the rush and thrill of free solo rock climbing” as players climb through exotic locations across the globe. The first area included in the game is Asia, with other settings and locations to be revealed at a later date.

To reach the top of each cliff, players will need to use Oculus Rift to look around and find a suitable path before using their hands to pull themselves up. Both the Xbox One controller and Oculus Touch controller will be supported.

“The Climb uses elements of the real life sport in gameplay to give players the sensation of rock climbing,” said Crytek. “For example, gameplay revolves around exploring rock faces to find a path to the top, and you must find different grips or holds, each with their own challenge, to lift yourself as you chart your own route. Rock climbing in real life is physically demanding. As athletes climb they sweat and chalk is used by climbers to return grip to sweaty hands. This is reflected in the game, as the more active you are, the more you’ll need to use chalk on your in-game hands so you can stay on the rock!”

“Gaming has always given us the opportunity to place ourselves in otherwise impossible scenarios, and VR technology such as the Rift makes us feel present in those scenarios like never before,” added Crytek CEO Cevat Yerli. “The Climb invites players to experience the intensity of one of the world’s most dangerous sports, and they’ll truly feel the thrill of being thousands of meters above the ground with nothing but their skill and a few precarious handholds to rely on.”

A release date for The Climb has yet to be confirmed. For a first look, check out the trailer below.

The world’s first VR rock-climbing game, from the creators of Crysis.

The world’s first VR rock-climbing game, from the creators of Crysis.