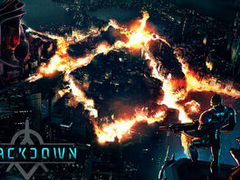 Crackdown 3’s cloud enabled multiplayer mode, which sends processing tasks to servers to enable 100 per cent environmental destruction, will require up to four times the network bandwidth of a regular multiplayer game.

“We are optimising for between 2 and 4 megabits,” Reagent Games producer David Jones told VideoGamer at Gamescom today. “That is our goal.”

Jones added: “It’s not significantly more [bandwidth than a regular multiplayer game], it’s maybe two to four times as much. A standard is maybe around 1mbit, so it’s a little bit more, yes.”

During our presentation of the game Jones also confirmed that it does “not use [cloud processing] in the campaign game. We wanted to create a very different experience for the multiplayer game. But at the same time we wanted players to have the kind of campaign game they always loved, and if they want to play that offline absolutely they should be able to. Obviously they have to go online for co-op but that’s still the same campaign game.”

“The 100% destructible environments is limited to the multiplayer side,” he added later.