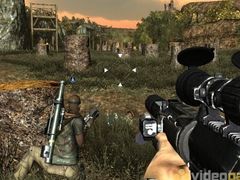 Eidos has released a playable demo of its upcoming Xbox 360, PS3 and PC FPS, offering a sample of single-player and two-player cooperative play.

The Xbox 360 demo weighs in at 736MB, considerably smaller than its PS3 cousin which is a chunkier 988MB. As far as we know both demos offer the same content. The demo wasn’t included in this week’s European PlayStation Store update so it’s likely to appear next Thursday.

A PC demo is also available.

The game is scheduled for release on Xbox 360, PS3 and PC on February 8 and you’ll find a host of information, screens and videos by heading over to VideoGamer.com’s Conflict: Denied Ops Blowout.

Let us know what you think of the demo in the comments section below.