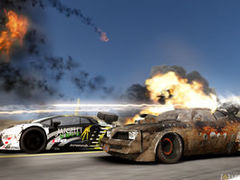 Super speedy combat-racer Gas Guzzlers Extreme is coming to Xbox One in Q4 2016, and to PS4 in Q2 2017, publisher Iceberg Interactive has announced.

Developed by Croatian studio Gamepires, Gas Guzzlers first arrived on PC a few years ago, with the console version set to feature all the content of the original game plus its Full Metal Zombie and Full Metal Frenzy DLC packs. In total, expect 12 modes, 42 tracks, 21 cars and 12 different weapons, along a heap of zombies to mow down.

I hadn’t heard much about it until today, but the game seems to be fairly popular on Steam, earning itself a ‘very positive’ reception in Steam user reviews. If you were to ask me, I’d say it looked like a combination of Full Auto and Twisted Metal with a hint of Carmageddon.

For a look at what to expect, check out this trailer for the Full Metal Frenzy DLC from way back in 2014.