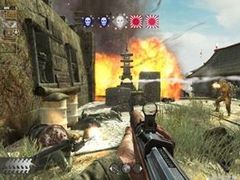 Treyarch and Activision have announced that Call of Duty: World at War Patch 1.6 will be released this week, meaning PC gamers can look forward to Map Pack 3 which console gamers have been enjoying, plus a host of bug fixes and tweaks.

Included in the patch:

– Fixed S&D round counting error when roundlimit is reached.

– Starting the game in Safe Mode will no longer toggle the “Soften Smoke Edges” graphic option.

– Mods: Client will no longer join a modded Co-op server via Game Invite unless they have that mod loaded.

– Mods: Client running a mod will be asked to unload the mod if they attempt to join an unmodded server.

– Mods: All singleplayer levels can now be run with a mod loaded.

The update will be free.