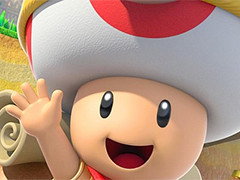 Captain Toad: Treasure Tracker is available now in the UK

UPDATE: Captain Toad: Treasure Tracker is available to buy in the UK now, VideoGamer.com can confirm. We’ve just bought one from our local GAME for £34.99.

The game also appears to be in stock at Argos for collection today.

Nintendo has yet to formally confirm that Captain Toad’s release date has been brought forward or respond to VideoGamer.com’s request for comment.

ORIGINAL STORY: Captain Toad: Treasure Tracker will be available in the UK before Christmas after all, according to a report on industry site MCV.

The site claims to have been told that the Wii U puzzler has been given a “new UK launch date of Monday, December 21” and that “all UK online retailers have now been given the nod to begin shipping Captain Toad as they see fit”.

Monday is actually December 22, but regardless MCV’s report suggests that Captain Toad may be available nationwide next week.

Officially the game is still due to launch on January 2, 2015. Nintendo has yet to formally confirm that the release date has been brought forward.

MCV’s update follows a day of confusion over Captain Toad’s UK release date. Earlier today it was rumoured that the game would be soft-launching at GAME next week after online pre-order customers claimed to have received dispatch notices from the retailer.

The rumours suggested that the game would be shipping online today and would be available to purchase in-store from Monday.

A GAME representative told VideoGamer.com earlier today that the retailer would not be able to offer comment on the rumours. Nintendo has yet to respond to VideoGamer.com’s request for comment.

Captain Toad: Treasure Tracker went on sale in North America earlier this month and had initially been due to release in Europe this side of Christmas before being delayed to 2015.

But if it does roll out on Monday, should you ask Santa to leave it under the tree? Head through to our review to find out what we thought of it.