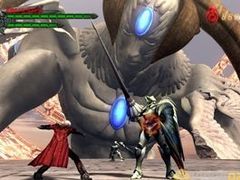 Capcom wants DMC5 to be ‘tailored to what fans want’

If Capcom decides to create Devil May Cry 5, it’ll be “custom-tailored to what fans want”, the Japanese company has said.

In particular Capcom wants the potential game to be well-received by the media, global head of R&D Keiji Inafune told VideoGamer.com at E310 last week.

Rumour that a fifth game in the action slasher series is in the works has been rife in recent months.

While Infanue refused to comment on the rumour, he did insist that the Devil May Cry series was popular enough to continue.

“Yes, there are a lot of fans of the Devil May Cry series,” he said. “We need to look at them, analyse what they want in a game, what they don’t want in a game, and then take that into account for if we are going to create a future title, and see if there is something we can create that is going to overcome their expectations, as well as create a title that’s going to get a lot of critical acclaim and be reviewed quite well.

The last title in the series, 2008’s Devil May Cry 4, was great, but it wasn’t brilliant. It replaced popular franchise protagonist Dante with debutant Nero as main man, which didn’t go down too well with fans.

Are you a Devil May Cry fan? If so, what would you like to see from a fifth game? Let us know in the comments section below.