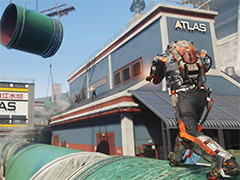 The map had originally been available exclusively to Season Pass holders and owners of the game’s Limited and Pro Edition, but was later made available to everyone for $5. It’s now available as a free download to all.

Atlas Gorge is a remade version of Call of Duty 4: Modern Warfare’s map Pipeline, and sees players fighting below a Chinese Dam. It isn’t yet known whether Pipeline will be one of the 10 Call of Duty 4 maps included with this year’s Modern Warfare Remastered.