BioShock is out now on iOS 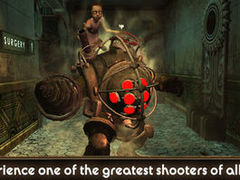 UPDATE: BioShock is available now from the UK App Store for £10.49. But before you give it a download make sure to check that your device is compatible.

The game will only work with iPad Air, iPad Mini 2, iPad 4, iPhone 5S, iPhone 5C and iPhone 5, and will not run on older devices.

ORIGINAL STORY: The iOS version of BioShock is available to download now in New Zealand, suggesting that a UK release isn’t too far away.

BioShock iOS features the original underwater shooter remade for iPad and iPhone but, as an earlier comparison video showed, fans probably shouldn’t expect it to look quite as good as the original.

Look out for a global release soon.