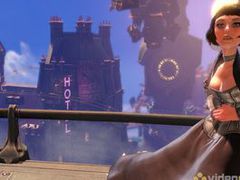 There’s no shortage of questions surrounding BioShock Infinite, but Ken Levine’s latest presentation has just renewed speculation over one of the game’s biggest mysteries. Remember those strange shimmers we’ve seen in previous footage – the ripples that seemed to subtlety transform objects in the floating city of Columbia? Well, they may actually be holes in the space-time continuum. That’s our current guess, but Levine himself has refused to directly confirm or deny it.

It also turns out that these tears can be manipulated by Elizabeth, the NPC companion you’re trying to rescue. I say “manipulated” rather than “controlled”, because it takes a great effort for her to do this. At one point in the demo Elizabeth appears to be overwhelmed by the forces she’s trying to handle, resulting in both her and the player being temporarily transported to what looks like the 1980s. It’s hard to convey the impact of this weird and wonderful shift, but suffice to say at 2K’s recent presentation it knocked everyone for six.

The demo kicks off with Elizabeth and the player – in the role of former Pinkerton agent Booker Dewitt – stocking up on supplies at a store packed with patriotic knickknacks. Flags and Uncle Sam marionettes hang from the walls, while Elizabeth goofs about in an oversized Abe Lincoln mask. Booker finds a horse-shaped Tonic, (the equivalent to Plasmids in the previous games) with the title “Bucking Bronco”, allowing him to bounce enemies out of cover and to suspend them in mid-air.

The first big moment occurs with the arrival of the Songbird – the massive, mechanical avian creature who appears to be stalking Elizabeth across Columbia. His arrival is signalled by earthquake-like shaking, causing numerous trinkets to shudder off their shop shelves. The Songbird smashes a hole in the wall and peers through; Booker and a whimpering, terrified Elizabeth cower behind a counter. The whole scene is strangely reminiscent of the T-Rex bits in Jurassic Park.

After the Songbird departs, our pair set out for the home of Comstock – a man who may be able to help Elizabeth to control her powers. However, Elizabeth is soon distracted by the discovery of a badly wounded horse, lying on its side in a ruined courtyard. Booker tells her to ignore the animal, and an on-screen prompt allows the player to euthanise the beast with his pistol, by holding a button until a gauge fills. Elizabeth intervenes, insisting that she can help the horse using a “tear” she’s found – but this has unforeseen consequences.

As Elizabeth concentrates she seems to open up a small hole in reality, a sort of energy field that affects everything within it. As the tear grows and encompasses the horse, its body is restored to its former glory – and just to make things really weird, the colour and patterning of its hair also changes. Meanwhile the surrounding area is transformed from a ruined, trampled battlefield to a lush garden with bright flowers. But it seems to be a major struggle for Elizabeth to control her powers, and suddenly something goes terribly wrong. Our heroes (and the now-dead horse) suddenly find themselves lying in the road in what appears to be a 1980s city: fluorescent lighting abounds, Tears for Fears’ Everybody Wants to Rule the World is playing from somewhere, and a nearby cinema advertises “Revenge of the Jedi”. A wailing ambulance comes roaring down the road towards us, and Elizabeth only just manages to restore things to normal in time.

In the latter half of the presentation we see further examples of these powers. Tears in the game world show ghost-like outlines of objects that can be brought into existence. Depending on the situation, you might ask her to create life-saving cover, spawn ammo, or open up an otherwise inaccessible doorway. Towards the end of the demo Booker is attacked by a giant airship, and it seems that there’s an option to have Elizabeth spawn a rocket turret into existence to take this down – although she’s unable to do this due in this instance to previous overuse of her abilities.

Booker’s primary antagonists are the Vox Populi – a group of anarchists intent on destroying Columbia. They seem to like bullying the city’s citizens, and at one point our heroes stumble across a group that’s about to stage the public execution of an unfortunate postman. The player can choose to intervene here, resulting in an absolutely massive battle, but the implication was that you could ignore it. Not every NPC will attack you, either: at another moment, the player aims his pistol at an aggressive thug, and Booker drives the man off with a harsh verbal warning. Rather than being a scripted moment, this appears to be the organic result of the player’s actions.

When combat does kick off, it seems to take place on a much larger scale than in previous BioShocks. Individual foes go down quickly, but you face large numbers of them at a time. The open environments are connected by the rollercoaster-like Skylines, and both Booker and his enemies can use these to zip about as they please. The Skylines were formerly used for moving cargo about the city, so occasionally you’ll have to leap to a different line to avoid a messy, collision-based death. On a similar note, there’s at least one point where you can have Elizabeth summon a cargo container to a line, smashing the enemies who are riding it.

Elizabeth herself recalls Half-Life 2’s Alyx Vance in terms of the way she talks to and works with the player, but Booker is far from our typical FPS silent protagonist. He directly addresses her and also comments on the things he sees, and as a result you immediately believe in the relationship between the two heroes. The whole thing feels a lot more human and character-driven than past BioShocks. The bright colours of Columbia and its “Fourth of July” style décor are matched by the feel of the game itself, which feels louder, livelier and far more expansive than its underwater predecessors, while still being utterly unnerving.

In short, it’s damn exciting stuff. Presumably it won’t be too long before everyone else gets a look at the new sequence, and then we can all try to work out just what the hell is going on with those tears. Whatever it all means, it’ll be a long time before I forget the horse transformation scene – it’s genuinely gobsmacking.