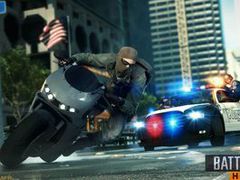 The Battlefield Hardline beta runs at 720p on Xbox One and 900p on PlayStaion 4, pixel wizards at Digital Foundry have confirmed.

Confirmation follows comments made by EA earlier this week revealing that Visceral is targeting the “same resolution settings” as Battlefield 4 for Hardline. As with the Hardline beta, Battlefield 4 ran at 720p on Xbox One and 900p on PS4.

It remains unclear whether the final game will see a resolution bump once it’s available next month, but at this stage it seems fairly unlikely.

Battlefield Hardline had previously been expected to run at 1080p on both platforms. Sony’s Adam Boyes announced at last year’s E3 that the game would run at 1080p/60fps on PS4, with Visceral later suggesting that it could achieve the same on Xbox One.

So where did it all go wrong?

If the final release sticks to 720p/900p, questions will be asked of EA as to why Hardline’s resolution hasn’t been improved since current-gen launch title Battlefield 4, or why Sony stated that it would run at 1080p.