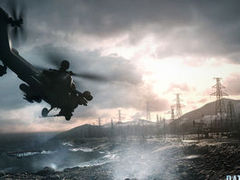 Battlefield 4 will not see a release on Wii U, DICE has confirmed.

Speaking to VideoGamer.com last night, creative director Lars Gustavsson explained that the decision to skip Wii U was to “ensure that [the team] deliver something good”, rather than “risking” the project by stretching the team too thin.

“I think overall for me as creative director, number one is to deliver a really great game and experience,” said Gustavsson on the subject of Battlefield 4 on Wii U. “Sometimes, at least for us, it’s focus on what you do well and what you know well, and ensure that you deliver something good than trying a bit too much, stretching yourself too thin and risking it.

“I’d rather play it safe, deliver something really good and then look at the future and what could possibly be done than trying a bit too hard and [failing].”

Battlefield 4 ships on Xbox 360, PlayStation 3 and PC later this year. A release on next-generation platforms is still be confirmed.