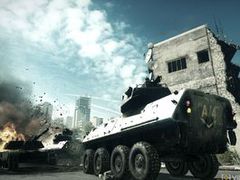 New Battlefield 3 DLC will be announced in New York next week, EA has suggested during an overnight call with investors.

Responding to a question about DLC for titles including FIFA 12 and Battlefield 3, EA VP of Investor Relations Peter C. Ausnit said: “You’re going to hear some announcements from us on Battlefield actually as early as next week in an event we’ve got in New York.”

Rumours suggest DICE is preparing an All American DLC pack, featuring maps set in New York, Miami, New Jersey and San Francisco. A NYC press event would be the perfect time to reveal such an add-on.