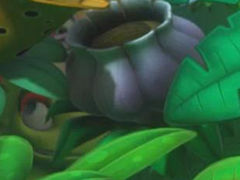 Playtonic has revealed more details on its spiritual successor to Banjo-Kazooie ‘Project Ukulele’, releasing the first in-engine screenshots and confirming that the project will be headed to Kickstarter in May.

The developer announced more details on the upcoming 3D platformer platformer during this weekend’s Rezzed, discussing its ambition for the game’s universe and teasing the first look at the game’s playable characters.

Can you spot them in the image above? Take a look again.

While a release date for the game has yet to be confirmed, Playtonic says that Ukulele will launch regardless of whether or not the Kickstarter is a success, with crowd-funding simply allowing the project to grow into something larger. A PC release is guaranteed, with other platforms and functionality (including the potential for Amiibo support) dictated by the success of the Kickstarter.

But the developer doesn’t just hope to release one game. Playtonic also has ambitions to create a brand new universe in which each of the game’s characters has the potential to star in their own title.

“Our team’s passion for our past games and the 3D platformer genre lead directly to the birth of Playtonic,” said managing director and creative lead Gavin Price. “Through Project Ukulele fans will finally get to see those pent-up ideas and passion become reality.

“Since the announcement of our studio the reaction from the community has been absolutely incredible. Through consultation with them we’ve decided to greatly expand the scope of our project with the launch of a Kickstarter program. By working together with fans we’re confident we’ll be able to create a game that not matches their expectations, but one which hops, flips and soars above them.”