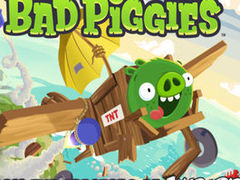 Bad Piggies tops out the App Store chart in 3 hours

Bad Piggies was a record-breaking launch for Angry Birds creator Rovio, the company has announced.

The Angry Birds spin-off, where you create vehicular contraptions for the dastardly green swine to ride in, managed to hit the #1 spot on Apple’s App Store chart within three hours of launching on September 27.

Which means Bad Piggies managed to claim the #1 spot faster than Angry Birds, or any of Rovio’s games. It’s also the third time in 2012 Rovio has had a game hit the top of the App Store charts within 24 hours of launching, after Angry Birds Space and puzzler Amazing Alex.

“It’s been an incredible launch, both for the game and for ‘Bad Piggies’ as a brand,” said Rovio CEO Mikael Hed in a press release. “We have an amazing audience who have shown fantastic support for all of our games throughout the year. Our fans have given ‘Bad Piggies’ an incredible reception – we can’t thank them enough!”

Rovio also said it will be releasing its first update to Bad Piggies within “the next few weeks”, which according to Rovio includes “more levels, unlockable content, and exciting plot twists in the pigs’ quest for the eggs.”