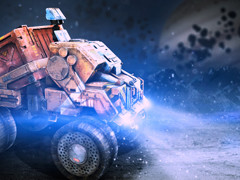 Heading to PC soon via Steam Early Access, Asteroids: Outpost is described by Atari as a “multiplayer survival game” that puts players in the role of a deep space miner, and tasks them with building and defending a base while exploring a “massive, unforgiving asteroid”.

Players can choose to form alliances with other players or fight against them as they scavenge for resources to expand their territory, and shoot down asteroid showers to protect their base and gain additional wealth.

“Asteroids is one of the most iconic titles in Atari’s portfolio of more than 200 games and franchises, and we’re looking forward to ushering the game into today’s digital gaming era,” said Atari CEO Fred Chesnais. “We’re paying homage to the original Asteroids by incorporating classic features such as asteroid blasting capabilities, while introducing a completely new premise and gameplay. Asteroids: Outpost will appeal to both fans of the classic Asteroids as well as enthusiasts of immersive survival games and expansive MMOs.”

The game is being developed by Salty Games, a new studio based in Los Angeles comprised of industry veterans with experience in various multiplayer games, including Call of Duty: Black Ops 2, Call of Duty: Ghosts and Star Trek Online.

Asteroids isn’t the only classic Atari IP set to receive a modern-day update, of course. A re-imagining of 1980s horror Haunted House launched on PC last November, with third-person co-op reboot Alone in the Dark: Illumination expected to roll out later this year.