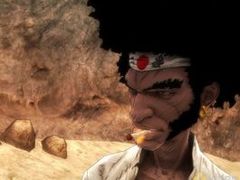 Atari has today announced that it is bringing Namco Bandai Games’ Afro Samurai video game to Europe in 2009 for Xbox 360 and PlayStation 3.

The game is based on the manga created by Takashi Okazaki and the hit anime series starring Samuel L. Jackson and has become popular because of its cutting-edge style and fusion of hip hop and Japanese culture.

Afro Samurai is the story of a man on a lifelong journey to avenge his father killed by the lethal fighter Justice – shedding Justice’s blood is Afro’s only reason to live. The game promises beautifully portrayed environments and characters drawn using dynamic cross-hatching visuals to give the game a pen and ink hand-drawn look. Samuel L. Jackson will once again provide the voice for Afro.

The game’s combat system has been designed to give Afro the ability to dismember enemies with ease which, when coupled with Afro’s expansive arsenal of moves, Namco Bandai hopes will create a blood-spattered masterpiece.

The game will also feature an original hip hop musical score with a new track by The RZA of Wu Tang Clan fame.

Look out for more on Afro Samurai over the coming months.