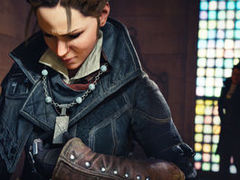 Assassin’s Creed Syndicate Update 1.3 out now on PS4 & Xbox One

Ubisoft has released Assassin’s Creed Syndicate Update 1.3 for PS4 and Xbox One, bringing a host of fixes and improvements to the open-world action title.

The update is approximately 700MB if you don’t have any previous updates installed, but only 150MB if you’ve been keeping your game up to date.