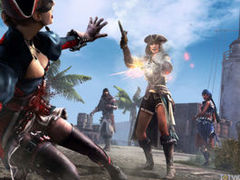 “Looking at Assassin’s Creed, its first week sales are down versus last year as players are waiting for the arrival of the next-generation of consoles,” commented Ubisoft CEO Yves Guillemot during the publisher’s Q2 financial results last night.

“The game is the best rated Christmas title. Players and journalists praised its unique setting, huge freedom and variety of gameplay, as well its fantastic open-sea pirate adventures.”

“We will have a clearer picture of [Assassin’s Creed 4’s] potential once the next-gen consoles are released,” continued Guillemot. “We are confident it will be among the top three best-sellers of November and December.”

Assassin’s Creed 4: Black Flag launched at the end of October on Xbox 360 and PlayStation 3, and releases next Friday, November 22 on Xbox One, PC and Wii U. A PlayStation 4 releases on November 29.