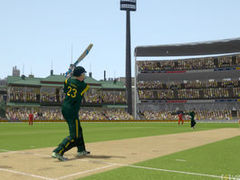 Ashes Cricket 2013 has been pulled from Steam just days after going on sale.

The game finally went on sale last Friday following a lengthy four month delay, but it’s since been removed from sale.

Publisher 505 Games has not disclosed reasons for the game’s removal, nor is it known whether it was removed by 505 or Steam owner Valve.

The Xbox 360, PlayStation 3 and Wii U versions have still not been dated, either.

505 Games and developer Trickstar Games have come under fire from fans for their handling of the Ashes Cricket license and the lack of communication following the game’s original delay. The game is also thought to have failed console certification on at least one occasion.

VideoGamer.com’s sister site Sportra checked out the game last week and came away less than impressed. The site said that it was “one of the most atrocious games you’ll play this year”, and noted that the “appalling glitches and errors [were] embarrassing”.