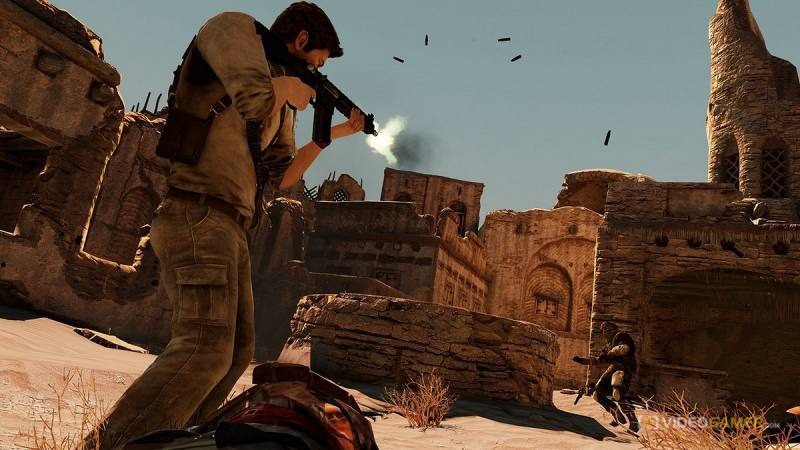 Ever wondered how Nathan Drake could seemingly shrug off a barrage of bullets in Uncharted like it was nothing? Okay, so it's a game right, suspend your disbelief and all that? Well, not exactly. Turns out, he never actually took any damage from gunfire in the first place.

That's according to animation director Jonathan Cooper, who revealed that the cheeky treasure hunter actually runs out of luck as opposed to health. When that happens, the bad guys are able to nail him with at single shot.

'The red UI that shows hits is to represent his luck running out,' explained Cooper. 'Eventually enemies will get a clear shot and kill him if he takes enough near-misses.'

Of course, this does presumably mean that Drake's enemies are a rubbish shot, although as we pointed out above, it's a video game. Still, this is where the likes of Crushing difficulty comes into play, which greatly enhances the accuracy and intelligence of your gun-toting foes.

Elsewhere, Amy Hennig added her two pence on the matter, stating that the design choice was 'to stay more aligned with the spirit and tone of the films we were homaging.'

It's an interesting concept for sure, although it still makes me laugh that Drake is literally able to run straight at a half-a-dozen baddies and somehow have enough 'luck' to survive for about 10 seconds straight.

Uncharted 4: A Thief's End saw Drake's luck finally run out (sort of), as it's the last game in the series to feature him as the lead character. Despite this, Hennig believes there's still plenty of material lying around to continue the franchise.

Got a favourite Uncharted moment? Let us know in the VideoGamer forums.