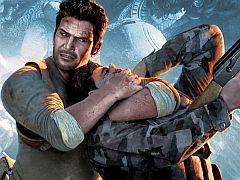 Don’t get me wrong: I really enjoyed the original Uncharted, but the combination of cover-based third-person shooting and Tomb Raider-esque exploring didn’t quite gel together as well as I’d hoped it would. The gun-play at times felt too twitchy, the cover system caused a few headaches and there were some terrible vehicle and on-rails sections – and for what was predominantly a third-person shooter, the lack of multiplayer seemed like a wasted opportunity. Well, it seems as though developer Naughty Dog had very similar feelings; the sequel, Uncharted 2: Among Thieves, is a superior game in practically every way. This is the very definition of a triple-A must own title.

Once again you step into the shoes of the stubble-faced Nathan Drake, a descendent of famed explorer Sir Francis Drake. Whereas the first game saw Nate using Drake’s journal to find some long lost treasure, this time he’s trying to solve a mystery centred on Marco Polo and the infamous journey home from China in 1292. 13 ships disappeared and almost all of Polo’s 600 men died. It seems Polo had gone on a mission to find the Cintamani Stone in the mythical kingdom of Shambhala. With the stone said to be worth billions, Nate sets off in an attempt to find the city deep within the Himalayas. Some familiar faces return, a new love interest causes trouble and plenty of double-crossing takes place throughout the adventure that will take you to some of the most stunning locations ever seen in a video game.

In keeping with the whole Indiana Jones vibe that ran throughout the original, Uncharted 2 is laced with funny one-liners, witty comebacks and a general light-hearted tone. At times it seems every bit as family friendly as Spielberg and Lucas’ blockbuster movie series, but it’s not all PG-rated laughs and hijinks. The story takes some incredibly dark turns, Drake and the rest of the cast really feel the strain at points, and certain events wouldn’t seem out of place in a more typically gritty World War shooter. These moments work extremely well and in turn make the characters more likeable in the process, giving them a human side that had been previously hidden behind the fun and games.

On the surface the core gameplay is near identical to that found in the first game, with Nate being just as comfortable firing an AK47 as he is leaping across a chasm to a small ledge a thousand feet above the ground. It won’t take too long to see how Naughty Dog has tweaked things for the better though, with the gun-play and cover system being smoother and more refined, making for an altogether more enjoyable third-person shooter. Moving from cover to cover still doesn’t feel as slick as it does in Epic’s Gears of War series, with Nate occasionally refusing to do what you want him to, but it’s far better than in the original, and aiming no longer feels excessively twitchy.

Brand new to the game is the ability to pick up riot shields and move while in cover. You’re limited here to a side-arm, but in the right hands you can still do some serious damage with a series of well-timed headshots. Moving and shooting while using the zoomed in over the shoulder view is slow, but you can also run and gun by holding down just the trigger button while moving. Aiming here isn’t nearly as easy, but at times it’s great to be able to offer some resistance while moving at greater than a snail’s pace. Adding some seat-of-your-pants, no-time-to-think gameplay are a number of chase sequences that see Nate running through the environment trying to avoid incoming attacks. You’re funnelled along a certain path here, but the sequences look incredible and work far better than what could easily have been another ill-advised series of Quick Time Events.

Melee combat doesn’t work quite as well, with Nate’s punches feeling slightly sluggish, but the simple system allows for instant take downs if you approach an enemy unseen; there’s also a more bar brawl-like style if you find yourself up close and in a tricky spot. Enemies will usually take a few blows before Nate will need to counter, but the window of opportunity is fairly large and easy enough to spot for all but the most novice of gamers. It’s fair to say that you’re better off sticking to the plethora of weapons whenever possible. There’s always a gun lying around or ammo to pick up, so you’ll never feel like the game is forcing you to go into battle with just your fists.

It’s somewhat of a shame that the end of the game gets a little bogged down by too many snipers and enemies with RPGs. It’s nowhere near as bad as the worst sections in the original game, but it still makes for very frustrating gameplay – especially as the checkpoint placement isn’t overly generous during long, drawn out firefights. It would have been far better had Naughty Dog relied on the impressive enemy AI to cause problems, and perhaps thrown in more of the hard to take down soldiers instead of overloading closed areas with missiles, grenades and laser sights.

Combat is just one half of what Uncharted 2 has to offer, with around half the game comprised of exploration and platforming, with a little bit of puzzle solving thrown in too. The puzzles really aren’t very taxing, with Nate’s journal usually holding the key, but the leaping about high above the ground gameplay is excellent and comparable to what we’ve seen recently in the Tomb Raider series. Platforming in Uncharted 2 never poses as much challenge as the trickiest sections in Eidos’ most recent Lara Croft outing, but it’s still great fun. Nate moves around so fluidly that clambering up walls, shimmying along ledges and hanging onto giant cogs is never a chore, and should you find yourself stuck the game will offer helpful hints at the press of a button.

Many games get all the basics right, but it’s the stand-out moments that often set them apart from the competition. Uncharted 2 is no exception, with thrilling sequences coming thick and fast – glorious set-pieces and production values that rival the best the system has to offer. Particular highlights on a list too long to detail include a breathtaking sequence on-board a train and a wondrous exploration sequence inside the most stunning caves ever to grace a video game. At times it’s hard not to just stop and stare and what’s in front of you, marvelling at the detail packed into every scene. The original Uncharted set a new benchmark for visuals on the PS3 and Uncharted 2 might even have surpassed its successor, Killzone 2.

Across the board Uncharted 2 screams quality. Visually it’s top of its class, but Naughty Dog hasn’t skimped on audio production either. The excellent voice cast of the original returns, along with a few newcomers, each delivering their lines in a natural fashion that is still rare in video games. It’s the soundtrack that really shines the most, though, and could easily have been lifted from the best adventure movies. The game knows just when to change the mood or highlight a moment, and even the game’s title screen gets you in the mood for some epic exploring. I encountered a few unfortunate moments in which Nate would glitch through walls, and sometimes he would hover and “fall” to his death, despite being mere feet from the ground. However, these are few and far between, and in no way hurt what is one of the most well produced games available.

With a campaign that’s at least eight hours in length (a good few more for most people who don’t simply rush through) and begging to be played through a second time, as well as tons of unlockables to buy from the in-game store, very few people would have complained had Uncharted 2 been entirely a single-player experience. It’s not just a single-player experience, though, with a fully-fledged online multiplayer component included too, featuring competitive and co-op game modes. Competitive modes see up to 10 players forming teams of five across seven maps and various game modes, including Deathmatch, Plunder (similar to capture the flag), Elimination (no re-spawning deathmatch) and Chain Reaction (capture the flag, but with flags needing to be taken in a set order).

These are all great fun and there’s a CoD-like perk system that lets you use in-game credits to buy new special abilities. It’s the co-op modes that we had most fun with, though, with up to three players fending off waves of enemies or working together to collect gold. Fallen players can be revived if a team-mate can get to them in time, but the impressive enemy AI makes reaching them incredibly tricky. Enemies don’t simply sit back and wait for you to come to them, with their mentality being to flush you out should no movement be made. First come the grenades, then they’ll push right up into your cover zone, often circling behind you if they can get there unnoticed. It all makes for some thrilling gameplay and should see the game have legs for months – extra content through DLC also seems like a certainty.

Uncharted 2 does so many things right, that its problems (a less than perfect cover system, some frustrating combat and unfortunate glitches) are easy to overlook. The single-player adventure packs in so many incredible moments that you’ll be talking about it with friends for months, the multiplayer functionality is superb and rammed with content, and the whole game looks beyond anything you’ll have seen before. Uncharted didn’t quite make the grade as a classic, but Uncharted 2 should earn the series a place among the very best exclusives to hit the PlayStation.

The single-player adventure packs in so many incredible moments that you'll be talking about it with friends for months and the multiplayer is rammed with content. A must buy.
9 Gorgeous visuals Loads of incredible moments Multiplayer modes are great Combat can frustrate towards the end