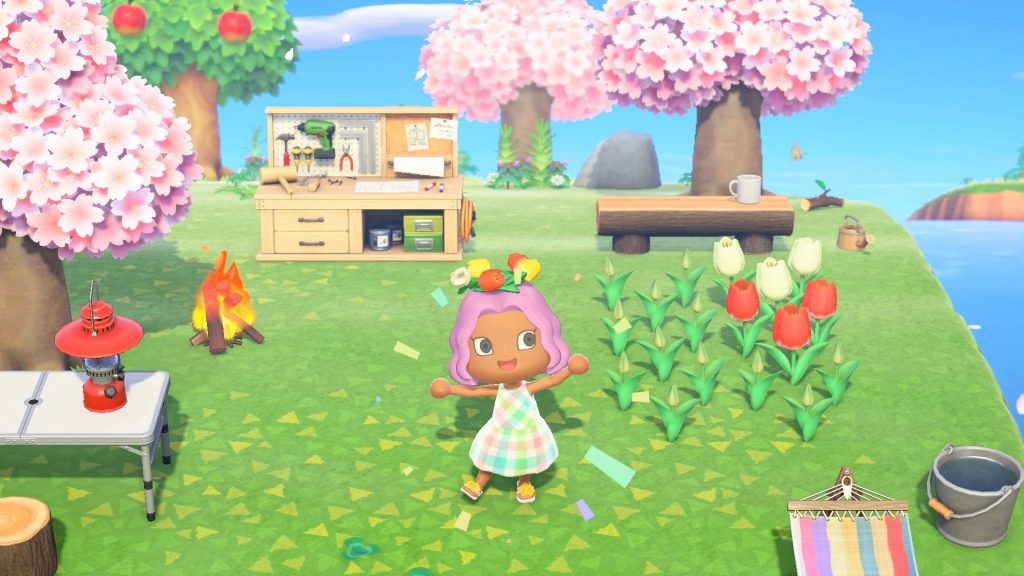 Firstly, crafting is a feature that we got a sneak peek of at E3, but the friendly narrator explained how it all works. Instead of buying tools like the shovel or the axe from the Nook shop, these will be craftable from materials found around the island. Even weeds contribute to crafting, and making better tools will collect better quality materials. But if they’re not the handy type, players can buy hardware from Timmy and Tommy’s Resident Services building.

Once the player has set up their tent on the island, Tom Nook will gift them a Nook Phone and one of the features is Nook Miles. Earning Nook Miles is based on a perk or achievement system; fishing, pulling weeds, buying and selling items, and catching insects will rack up the player’s Nook Mileage. Special items and recipes are on offer for reaching certain levels of Nook Miles, which will likely add cool furniture and decor to the little tent.

Like the previous games, the weather will change with the seasons, but this time it looks gorgeous. The weather effects of blustering gales and golden hour of sunsets illuminate the new game and really makes the island come alive. Another feature that adds dynamism to New Horizons is the multiplayer. There will be four-player local and eight-player online multiplayer, and a photo mode will commemorate the many, many island parties. Let’s hope it doesn’t end like Fyre Festival.