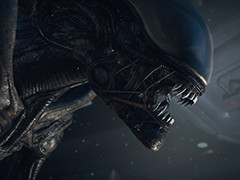 Alien Isolation has sold over 1 million units worldwide since launching in October, Creative Assembly has announced.

Despite its critical success, however, sales of the first-person horror have been slower than that of 2013’s Aliens: Colonial Marines, which sold 1.31 million units within its first 7 weeks on sale.

“It has been fantastic to watch the reviews come in and read of the reactions of players, hidden in the bowels of Sevastopol Station, terrified to make the next move,” said creative lead Alistair Hope. “We set out to make the Alien game we had always wanted to play and from these figures it seems we also succeeded in making the Alien game another million wanted to play. We hope many more gamers enjoy Alien: Isolation in 2015.”

While plans for the series’ future have yet to be confirmed, lead game designer Gary Napper said last month that talk of a sequel was a “daily topic” at the developer.

“People have their own ideas for where it should go, our writers have some solid concepts and yes, we do have a great opportunity to continue [Amanda Ripley’s] story,” he said.

“If we made a sequel I would like to stick to the same terrifying single Alien approach but do more with the environment and interactivity within it.”