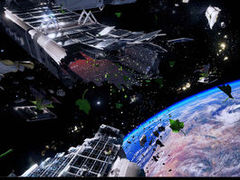 “I think there’s a real gap in the marketplace where this game can fit in,” Orth said in the latest issue of Game Informer. “It’s a four-hour experience, it’s going to be in the $20-30 price range, and it can be completed in one sitting. It’s going to have kick-ass quality production value.”

Described by publisher 505 Games as a “first-person experience”, Adr1ft sees players taking on the role of an astronaut who awakes aboard a destroyed space station with no memory of what’s happened or why she’s drifting through space.

With oxygen running out, players must find repair bays to help fix the astronaut’s suit before restoring power to the station’s escape pod to return home.

“We really want to amplify the horror of the reality of the situation,” added Orth. “It’s not a horror game, but we want to make sure it feels like that.”

Adr1ft launches on PS4, Xbox One and PC this summer.