Additional courses will be added to New Super Mario Bros. U 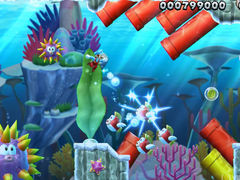 DLC for Wii U launch title New Super Mario Bros. U is coming, Nintendo has announced.

President Satoru Iwata added: “As with New Super Mario Bros. 2 for the Nintendo 3DS, you’re talking about the additional courses.”

“Yes,” said Tezuka. “We’re trying to think of ways of play that are different from New Super Mario Bros. 2, but we haven’t made anything yet! (laughs)”

“Right, rather than distributing content that’s pre-made at a later date, you’re going to start working on it now,” added Iwata.

Daiki Iwamoto of Nintendo’s analysis and development division concluded: “The mechanism for adding courses is already there, so please stand by for an update on what they’ll be like.”

New Super Mario Bros. U will be released in the UK on November 30 alongside the Wii U. Read our review to hep decide if Wii U is worth your money .