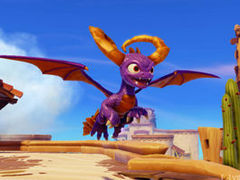 Activision Blizzard Studios, a new film and television studio which will create original content based on the firm’s iconic intellectual property, has been launched.

Former Disney executive Nick van Dyk will co-head the division along with a senior creative executive who will be announced soon.

The studio’s first production will be Skylanders Academy, an animated TV series based on the Skylanders game series featuring the voices of Justin Long as Spyro, Ashley Tisdale as Stealth Elf, Jonathan Banks as Eruptor and Norm Macdonald as Glumshanks.

Activision also has a “near-term initiative” to create a “robust cinematic universe based on the Call of Duty franchise”. In addition to a series of Call of Duty feature films, Activision Blizzard Studios believes there is a possibility of television adaptations.

Kotick added: “We intend to approach film and television development with the same unwavering commitment to excellence we are known for in game development.”