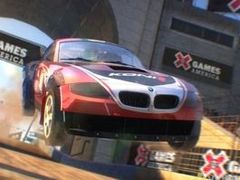 At a Codemasters press event taking place in London this morning, the UK publisher confirmed that upcoming racing game Colin McRae: Dirt 2 will include eight-player multiplayer racing – a first for the series.

Speaking at the event, game design manager Ralph Fulton confirmed that the eight-player limit was decided upon as it suited the gameplay and not because of any technical limitations – last year’s GRID, built using the same EGO engine, supported 12 players online.

He said: “I’m delighted to announce that we have listened to feedback from our fans, from our community and also from the critics, and can announce that Dirt 2 features a fully integrated eight-player online multiplayer mode, a first for the Dirt series.

“I’m at pains to stress that’s not a technical limitation. It’s the same engine which powered GRID’s 12-player multiplayer experience. However GRID featured a very different kind of racing.

“In our extensive play-testing of Dirt 2, both internally and external focus tests, we found that these types of cars on these types of tracks, 12 players just gets a little crowded, and made crashing a bit too prevalent. That takes away crucially a lot of the fun of multiplayer competition.

“We’ve found in our extensive testing that eight is the magic number and eight players is the sweet spot.”

He added: “Our PR guys are always on at us to have bigger numbers than the last game but in this instance smaller is better.”

In the newly announced Online Jam game mode players will be able to race against their friends (or enemies) using any car, on any track and any race mode.

Fulton also announced that a special Colin McRae memorial event will be unlocked at the end of the game. Scottish rally driver McRae tragically died in a helicopter accident in September 2007, which also claimed the life of his son as well as two family friends.

Fulton said: “At the end of the game, when the player has competed in world tours, when he has won the X Games of America, we think the fitting finale to the game is what we’re calling the McRae Memorial Challenge.

“This is a special one-off three stage rally in which the player will compete against Colin’s own family, Jimmy and Alister McRae, and a host of as yet unannounced motor sports superstars. We’ll be revealing a list of their names closer to our release date.”

Check out our recent hands-on impressions of DIRT 2 here, and expect more from the dev team on the site next week.

DiRT 2 will feature a roster of off-road events, taking players to…

DiRT 2 will feature a roster of off-road events, taking players to…