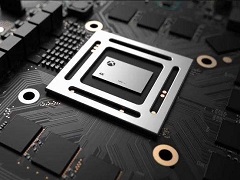 Xbox Scorpio: Everything We Know About Microsoft’s New Console

The Project Scorpio announcement was arguably the biggest deal of the Xbox conference at E3 2016 (and would have been even bigger had it not be comprehensively leaked beforehand). Now that the dust has had time to settle, and Microsoft employees have got their messaging aligned, we’re getting a clearer picture. You’ve got questions about Project Scorpio? We’ve got answers. Some answers, anyway, at least as much as we can from the info currently out there.

When is Project Scorpio out?

The official, if vague, release date in the teaser shown at E3 this year said ‘Holiday 2017’, which, translating from the American, means Christmas, probably October or November. Given that that date is still a long way away, it could change (although it’s hard to imagine that if they were going to push the release they’d move it to the wrong side of a Christmas period).

Will Project Scorpio be as good as a gaming PC?

They haven’t released many of the technical specs, but we know one of the most significant. The performing power of a computer is measured in ‘flops’ and Project Scorpio has six teraflops, which is a lot of flops, and roughly equivalent to a current high-end gaming PC. By the time it comes out, though, PCs will have moved on; they can be updated continually, and much faster than consoles. So, when Project Scorpio comes out at the end of 2017 it’ll probably be as powerful as PCs were now, in mid-2016, which is still pretty good and kind of the expected standard for new consoles.

Should I get the Project Scorpio console if I don’t have a 4k TV?

In an interview with Eurogamer Phil Spencer initially said that no you shouldn’t. Project Scorpio was apparently designed specifically with 4k resolution in mind, hence the six teraflops (which is the power you need for proper 4k), and if you don’t have that bomb-ass new TV then “the benefit we’ve designed for, you’re not going to see.” This was a bold statement to make, and this may have been pointed out to Phil, as he later went on to clarify his comments further. If you’ve got a standard TV you’ll notice a difference in how the games play because the Scorpio is so much more powerful, but you won’t be getting the full visual benefits Project Scorpio is designed for. So in the end only you can answer that question, possibly based on how much spare cash you have knocking around. Follow your heart.

How much will Project Scorpio cost?

Nothing is confirmed yet, but probably quite a bit. Phil said in the same interview that it’s going to be at a “premium price”, which is a universal shorthand for ‘expensive’. The Xbox One, for comparison, was first announced as $499, and Project Scorpio is reportedly going to be about four times as powerful, so a tag in the region of $600 wouldn’t even be that surprising. But this price is part of Project Scorpio being a product aimed at consumers who are after a 4k gaming experience. It seems like Scorpio is being teed up as the highest quality version of a product, sort of how you can buy a regular phone or, like, one made out of gold.

Will Project Scorpio have VR

Xbox hasn’t made any big commitments to VR – certainly not the kind Sony have made, at any rate – but Todd Howard from Bethesda is in the Project Scorpio trailer talking about Fallout 4 VR, and Phil has talked about how Project Scorpio is built to support VR. Whether that means a dedicated peripheral system like PlayStation VR we don’t know, but there’s definitely going to be some kind of VR capability on the Scorpio box. Let’s not forget that MS has been quietly putting some effort into augmented reality for a little while, too, with the HoloLens.

Yup. That’s been a big deal for Xbox. It’ll apparently be able to play Xbox One games. Allegedly, and there’d be chaos if MS goes back on this, every game you buy for your Xbox One you’ll then be able to play on your Project Scorpio box when or if you upgrade to it, and games developed going forwards will be playable on all the consoles, and Phil has also suggested that devs could also have the option of releasing updates to existing games to boost them up to 4k if you’re running them on Project Scorpio.

This all probably links to the Play Anywhere initiative, whereby MS games you buy will be playable across the different MS platforms you own.There won’t be any exclusive, but the messaging on this from Xbox has been mixed. For now, though, you probably don’t need to trade in everything you own in a panic.

Is Project Scorpio a next generation console?

Maybe? But no. Sort of. Apparently it’ll feel like that in terms of the leap from Xbox One to the Scorpio, but Phil is going on about “beyond generations” and all that, which is linked to the backwards and forwards compatibility stuff – because you can play all your games on all the different consoles there isn’t such a definition between the different boxes, and you have to get Project Scorpio to get all the latest games. It’s all one big happy Xbox Family (but with a cousin who refers to themselves embarrassingly as the ‘master race’ in front of other people).

What about the Xbox One S?

Ah yes. The Xbox One S is smaller (which is good, because the full size XB1 is so big it’s a flag and a currency away from seceding from your living room and becoming a new principality) and doesn’t have an external power brick, cheaper, and supports 4k playback from blu-ray and streaming sites like Netflix. It doesn’t support 4k gameplay; that’s where Project Scorpio comes in, but the Xbox One S means you can get a brand new current gen console bundled with a 4k blu-ray player for a pretty affordable price.