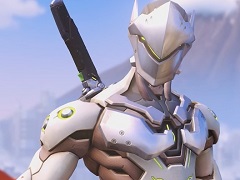 Genji is a cybernetically enhanced ninja, now mostly machine rather than man. Basically Robocop but without guns. He’s nimble and has a variety of skills, and will often be the guy that killed you from behind without you realising he was there. If you fancy having a go playing him but weren’t sure where to start then look no further: this guide has the info you need. You should also definitely play in a team with Hanzo and Genji together at least once, because they have fun banter based around being brothers that want to kill each other.

Genji is the most agile hero out there; he’s even faster and more ninja-esque than his brother Hanzo. Genji’s passive ability is called Cyber Agility, and it means he can double jump and wall climb. By using these together and experimenting you can reach almost any area on a map. Genji can jump, then change direction in mid-air with the second jump. He can also jump at any point during a wall climb. Get used to all the different ways you can get around and use them to your advantage when you’re getting into or out of a fight.

The meter on Genji’s Swift Strike will refill with every elimination you make, which includes kills and kill assists you make with other weapons. The bonus is that when using Swift Strike Genji is moving fast enough that he’s very difficult to hit with many standard attacks. It can take out enemies with low health in one go, and get you out of a tight spot.

Genji’s Deflect is a godlike power

Genji’s Deflect is so versatile that we’ve previously dedicated a whole section to it in a different guide. Genji can Deflect almost any attack, including many ultimate abilities and Soldier 76’s healing. Genji can even deflect attacks that an enemy Genji is deflecting at him. It’s a great ability that can easily take out turrets and overconfident adversaries alike.

Genji is very much a flanking character, but you have to be a little cautious with him. He’s not as robust as some of the other offense heroes, and doesn’t have the teleporting abilities that Tracer and Reaper do to get out of a fight safely. To be most effective as Genji stay at a bit more distance and use your shuriken (unless you’re about to unleash Genji’s ultimate, which you can only use at melee distance).

Practise primary and secondary fire with the shuriken

There are two modes of fire with the shuriken: primary shoots out a volley of three shuriken in a straight line, and the secondary fires three in a horizontal spread. As you can imagine they have different applications. The primary fire has a longer range and is much more precise, so you can use that when further away to pick of distinct enemies. The secondary fire has shorter range and is more useful for spamming at multiple enemies up close and covering your escape.

Be tactical with Genji’s ultimate

With Genji’s ultimate your primary shuriken attack is replaced with a melee attack with a katana, although it does project damage in a cone in front of the blade (because, you know, magic dragons) so in that sense it’s got some range to it. This means that, unlike, say, Pharah, where you just aim and watch the fireworks, or McCree’s which only requires you to pick your moment, with Genji’s ultimate you have to be quite actively involved.

Genji’s health isn’t buffed and he doesn’t get a shield, so use his Cyber Agility to be a moving target. Genji’s damage, however, does get buffed, and if you use Swift Strike to chain those fatalities together you’re laughing.

Overwatch heroes Genji is weak against

One of the most dangerous heroes to Genji is Zarya since her primary weapon is immune to Genji’s Deflect. Winston, another tank, can be a thorn in Genji’s side for the same reason he is one to Tracer: his Tesla Cannon attack will arc to Genji even if the aim isn’t exactly which negates some of the advantage Genji gets from his speed. Winston and Zarya are both much slower than Genji, though, so you should be able to evade them. You should also try and find cover when you hear Soldier 76 and McCree announcing their ultimates, because they both have assisted aim, so evasion won’t help you.

The worst hero to come up against, however, is probably Mei. She can seriously hamper Genji’s mobility with her ice weapons, and a Genji that isn’t moving will shortly become a Genji that’s dead.

Overwatch heroes Genji is strong against

Depending on how confident you are with Genji then Torbjorn and his turrets are either hard to deal with or really easy – they track your movements, but you ding them in one go with a well placed Deflect. This is a tactic that works well up against Bastion too, incidentally. Genji is also pretty good at countering his brother Hanzo because he can match his speed and spam shuriken in all directions, but presents a harder target for Hanzo himself to hit.

Genji’s speed and jumping-all-over-the-place-ability make him ideal for flanking to counter other enemy backliners like Widowmaker, and the supports Mercy, Zenyatta, and so on, as long as you don’t over-extend yourself and break too far away from your main group.