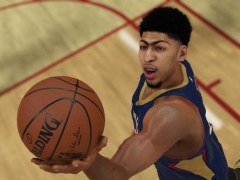 With NBA teams scoring upwards of 100 points per match, you’d think it was easy to score endlessly in a game, but it can actually be very tricky. Creating space to make that easy basket can be a great challenge in NBA 2K15, which is why VideoGamer.com has put together some tips and tricks for beginners to help you understand the basics of offence.

Once you pick a team, take a look at their stats so you know how to utilise every player in the lineup.

If you choose the Golden State Warriors, for instance, know that Steph Curry is the best three point shooter in the league, so you want him to have the ball from beyond the three-point line, in space, nailing jumpers.

Take a look at your team and see where you’re best: if you have a lot of big players, like the Indiana Pacers, feed the post and back down defenders to take close range shots. If you have quick and powerful players like LeBron James and Kyrie Irving of the Cavaliers, attack defenders and find lanes to run at the basket for layups.

Unless you’re a basketball player or coach, you won’t have any idea what your players are doing on the court. Players will make runs and call for the ball and you’ll miss it because you don’t know a team’s plays. Head into the coach settings and change these settings:

Now, you’ll see every run and block all players make, so you can see exactly how a play is supposed to go, and the game will automatically select plays for you too. For beginners, this is the ideal way to approach games. The only issue is that on defence the game will always select “Man to Man” defending, whereas in many situations it’s better to go with 2-3 or 3-2 zone.

For now, stick with these settings, and when you feel confident, try choosing your own plays.

Run the pick and roll

As the ball handler, you can hold B/Circle and ask one of your big men to run a screen. The longer you hold the button will determine what type of screen your big man will run. There are three types:

By pressing the button for a short time, the big man will fake a block and then ‘slip’ towards the basket. Note the big man will not block the defender guarding the ball handler, but is making a dummy run for you to give him the ball.

Holding the button a little longer will make him run a ‘roll’, which is similar to a slip, except he will actually block for the point guard currently dribbling the ball. This is the most common option and is great for guards effective at attacking lanes.

After the block, the big man will move away from the basket and look to take a pull-up jumper. This is good if your blocker is effective at mid-range shooting, or running and finishing layups.

Look at your player’s feet to score

NBA 2K15 has introduced a new shot meter, which is based at each player’s feet. The half-circle has a blue “sweet spot” which grows and shrinks depending on where your player is on the court, and how close defenders are to him.

Keep an eye on this as you move around, knowing each player’s most effective spot on the court for shooting will help improve your shooting percentage.

There is a small white line in the centre of the bar that is the perfect placement for the shot stick. If you can release the stick when the bar fills to this point, the shot is guaranteed to go in. So rather than look at your player’s arms or the ball, when possible, look at their feet and the bar to try and improve your shooting percentage.

Don’t take a shot out of desperation, work a decent opportunity to make a basket. Keep passing and dribbling until the chance presents itself as 24 seconds is a surprisingly long time to have a shot.

Even when you have a good look at the hoop, there will still be times when you miss an easy shot, it happens all the time in basketball.